Depending on the type of news you read, Huawei has either had a banner or nightmare 2018.

Depending on the type of news you read, Huawei has either had a banner or nightmare 2018. If you focus on consumer gadgets, you’ll likely have read all the rave reviews that Huawei’s phones garnered in 2018, especially for their cameras. But if you follow business or political news, you are well aware that Huawei is under ongoing scrutiny by the U.S. government.

The latter is a controversial topic still up for debate. The former, however, is far more conclusive: last year’s P20 Pro raised the bar for mobile photography, and this year’s P30 Pro takes a significant leap ahead. In fact, it would not be an overstatement to say the P30 Pro is a breakthrough in digital imaging.

There’s no point in burying the lede any further so let’s just get to it now: the P30 Pro excels in two areas previously considered weak points of mobile cameras: low-light photos and zoom shots. Huawei accomplished this by engineering two unconventional camera lens systems that break from tradition, and as a result, can produce well-lit images in extremely dark situations or zoom into objects far better than what rival smartphones are currently able to do.

In fact, when various tech writers (including myself) shared comparison images on social media, the results were so unbelievably lop-sided in Huawei’s favor that we got a fair share of incredulous feedback accusing us of doctoring the results.

We didn’t. The below samples, taken in a dark alley in Hong Kong by the P30 Pro, Samsung Galaxy S10 and iPhone XS, are completely unaltered. 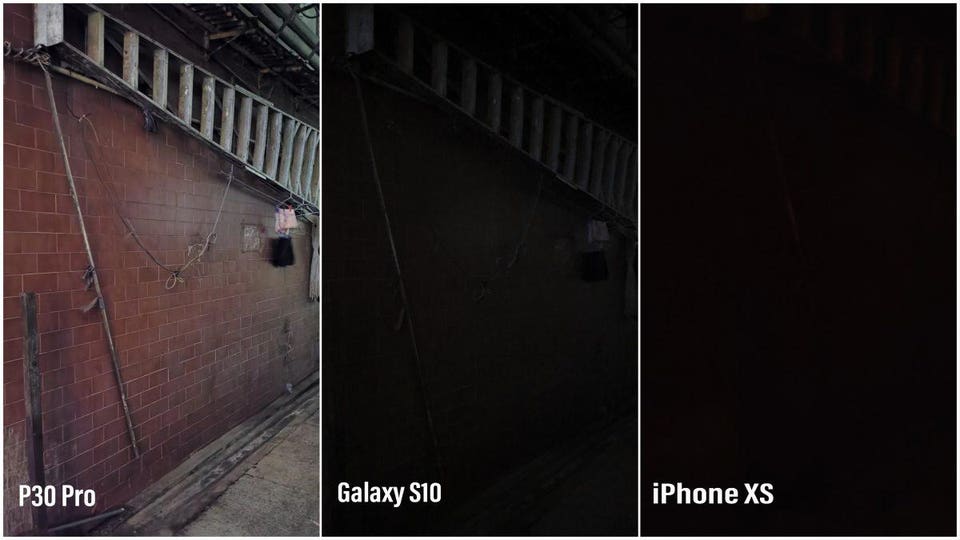 Three images shot in a near pitch-black alley in Hong Kong by the Huawei P30 Pro, iPhone XS and Samsung Galaxy S10.

But of course, there’s more to a smartphone than just the ability to capture images in the dark and zoom up close, and in those other areas, the competition is more even.

Design and build: nice, but we’ve seen it before 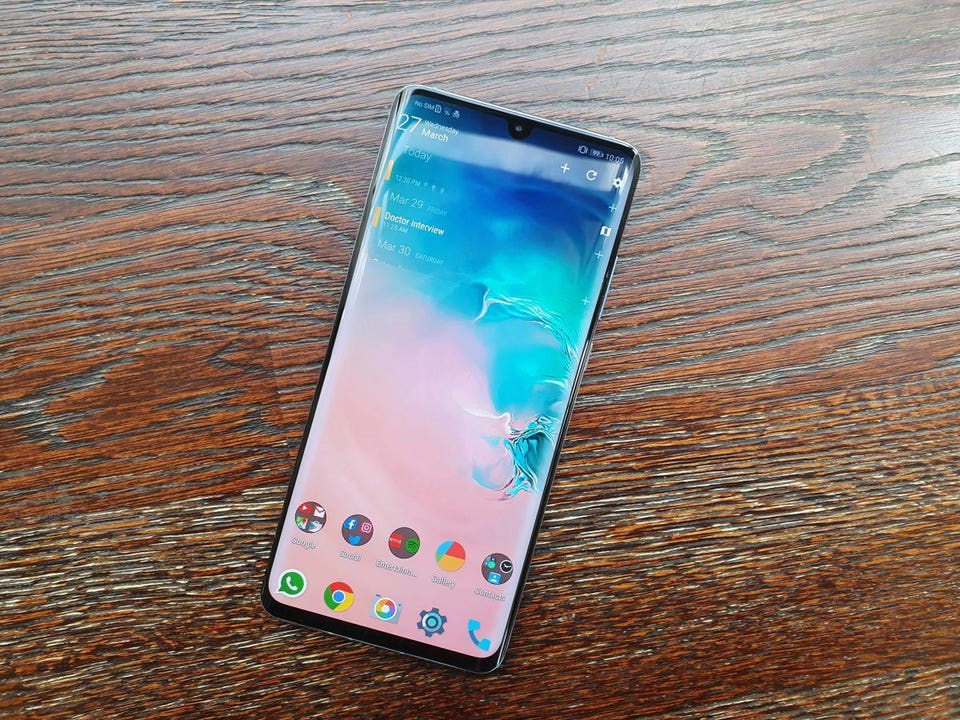 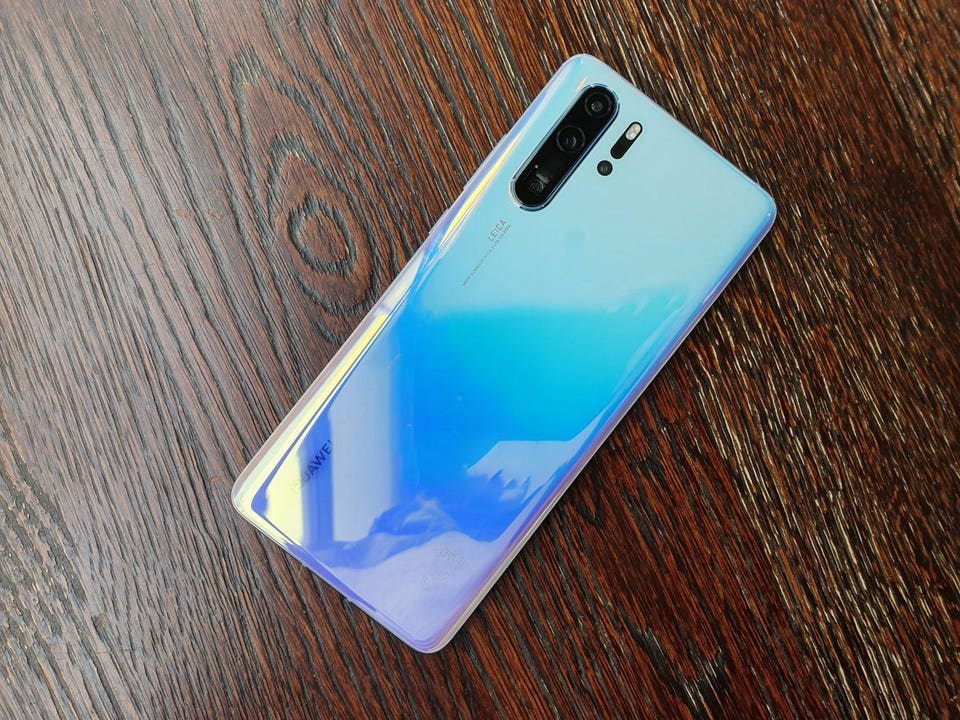 The glass plate has a gradient finish that shifts in color depending on the lighting.

With a 6.5-inch screen, a large battery and those complicated camera sensors, the P30 Pro is relatively heavy at 192g. But because that OLED display is curved at the sides and the bezels surrounding the screen are razor thin, the device keeps roughly the same size as the iPhone XS Max or Samsung Galaxy S10+. It’s a very nice looking phone, with a shimmery gradient colored back that appears to shift in hue depending on the lighting, sturdy aluminum sides and a crisp OLED screen, but it’s nothing we haven’t seen before. In my opinion, I think Huawei’s last major release, the Mate 20 Pro, looks better due to its more unique design aesthetic.

In fact, I’m disappointed that the P30 Pro sports a notch instead of the newer hole-punch cut-out design. The notch on the P30 Pro is tiny, but I find the hole-punch design (seen in the Samsung Galaxy S10 phones and also Huawei’s own Honor View 20) more visually appealing and cutting-edge. As much as Huawei has climbed ahead in photography, its display tech still lags Samsung’s, as it’s obvious that Huawei right now can only implement the hole-punch design on LCD screens and not OLED panels. 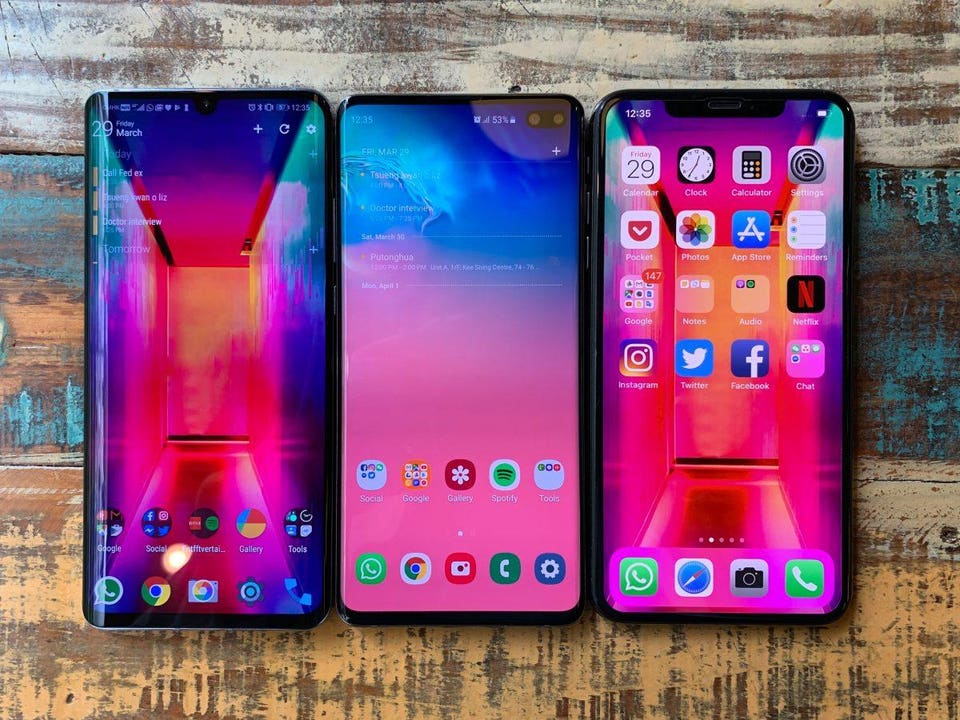 The Huawei P30 Pro’s notch (left) is smaller than the iPhone XS’s large notch (right), but I personally prefer the S10’s hole-punch design the best (middle). 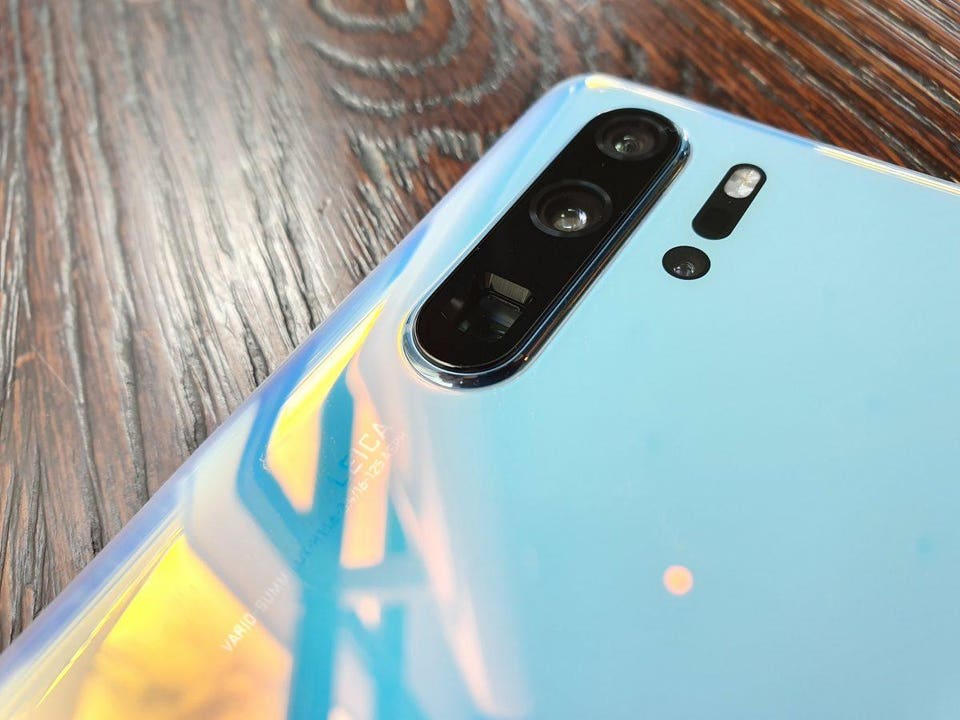 The camera system of the P30 Pro is a major upgrade.

So here’s what Huawei packed into the bump: a 40-megapixel main sensor, 20-megapixel wide-angle lens, and an 8-megapixel telephoto lens. The main sensor and the telephoto lens are the two that have been re-engineered from the ground up to achieve their technological breakthroughs.

The main sensor breaks from convention by using an RYB sensor (red, yellow, blue) instead of the ubiquitous RGB (red, green, blue) sensor, with Huawei’s reasoning that yellow light is superior to green light because because yellow contains enough green while taking in more red—crucial for low light imaging.

Don’t just take my word for it, see for yourself: the below sample was shot in my room at night, with all lights turned off and curtains closed. The iPhone image (near total darkness) was what my eyes saw at the time. What the P30 Pro can do in pitch blackness is uncanny. 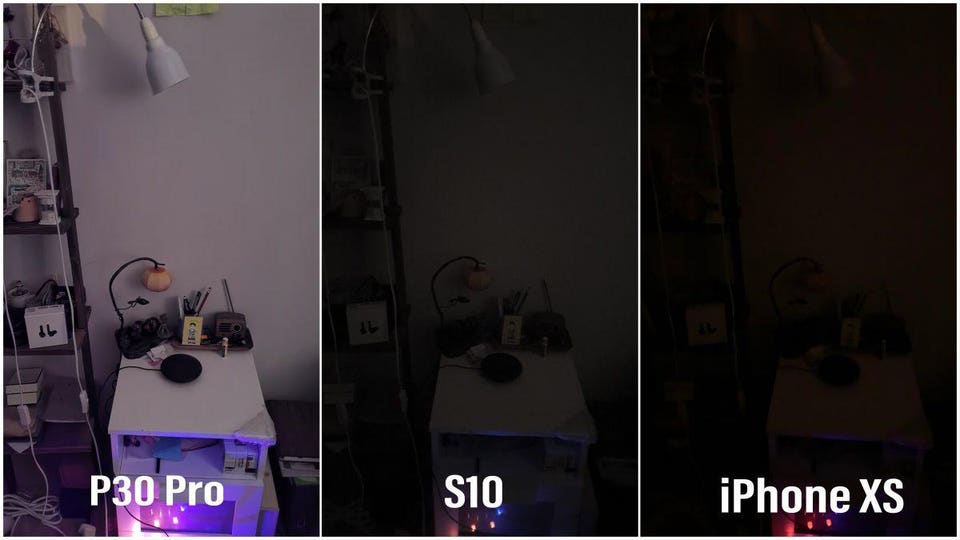 It’s not even close.

The telephoto lens, meanwhile, uses a periscope-like design in which the lens directs light sideways (left to right) within the phone’s body to an image sensor that’s placed perpendicularly to the rest of the image sensors. This, along with complicated software algorithm and image processing, allows the P30 Pro to achieve 5X optical lossless zoom and 10X digital zoom that’s almost lossless. 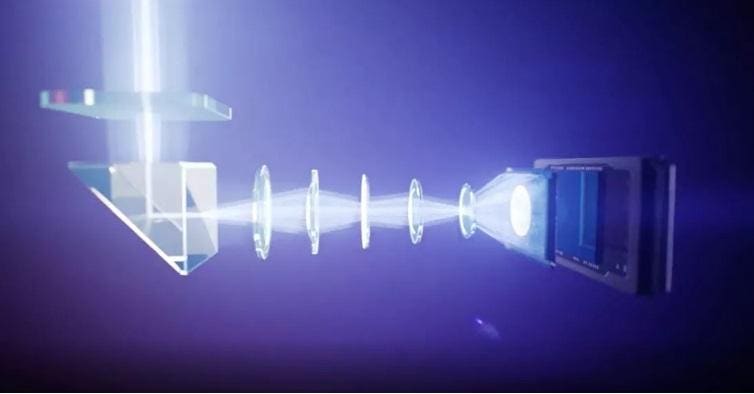 A render of the periscope-like telephoto lens in action.

Here’s a sample of the zoom in action. The first image you see is a reference image of the scene to my eyes. 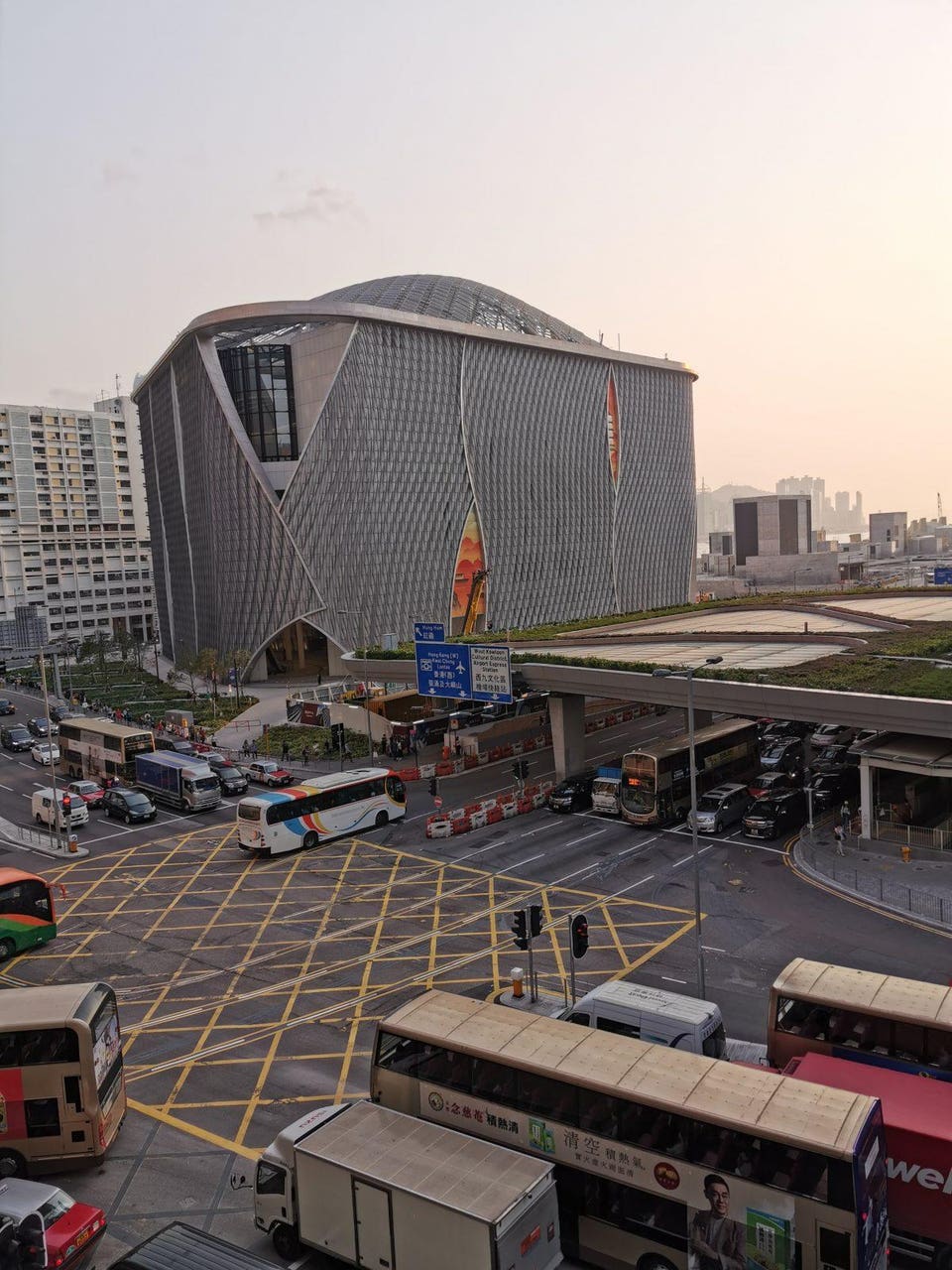 The Xiqu Centre in Hong Kong.

And here are 10X zoom images focusing on the blue street sign, captured by Huawei’s, Apple’s and Samsung’s best. 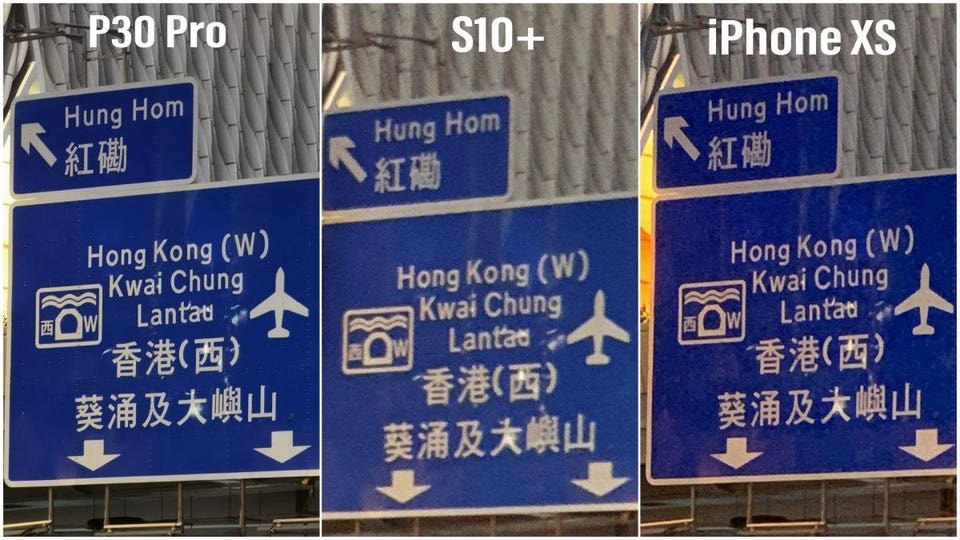 The difference is more jarring when you pull in closer. 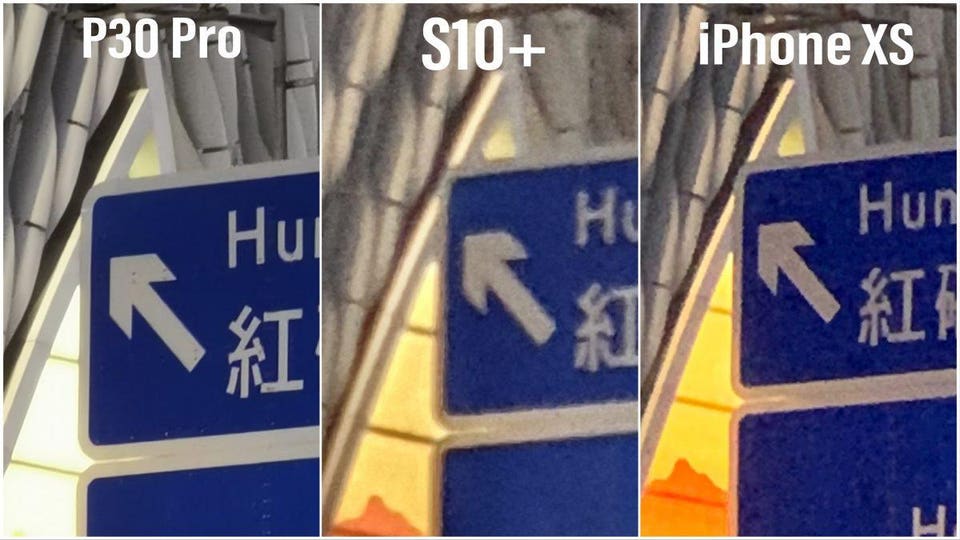 A closer crop of the 10X zoom.

In fact, the P30 Pro can achieve digital zoom up to 50X, and while at this scope the image does become blurry, the fact that you can essentially magnify an image by 50 times and still get something that’s relatively legible with a gadget no thicker than a wallet or notepad is surreal. 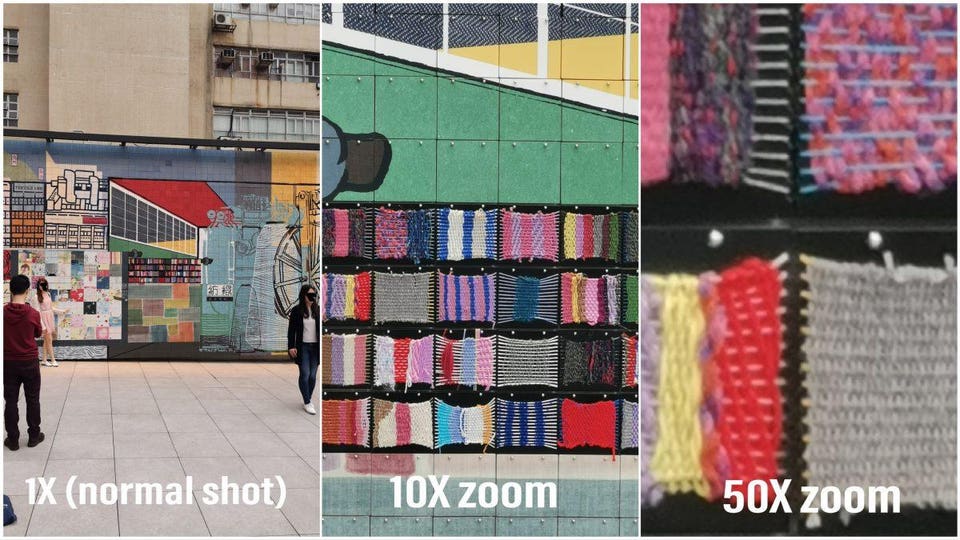 The 50X zoom image is not super sharp, but you can still see the knitting patterns and colors. 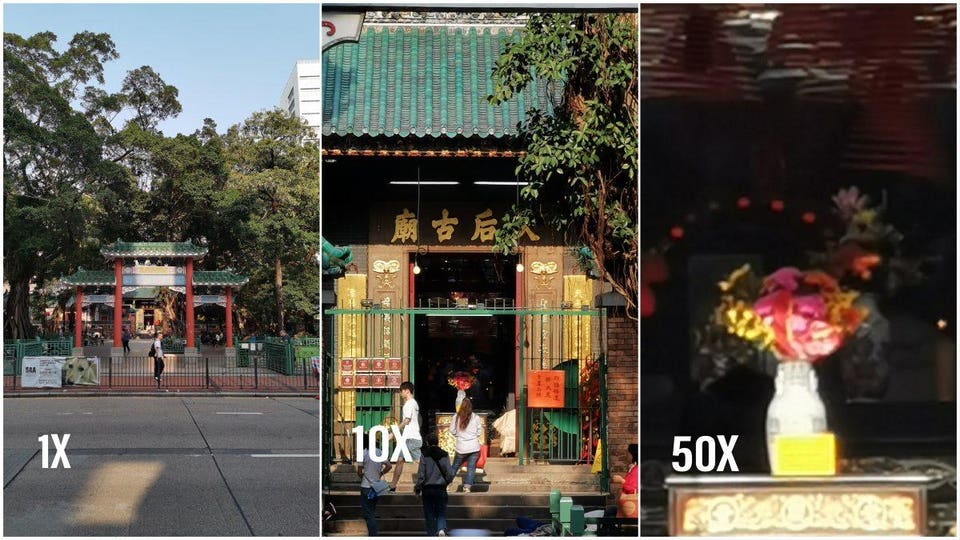 Here’s another sample. Keep in mind all these shots were taken with me standing in the same spot.

Now some have argued that zoom shots and low light image are niche areas of the mobile photography experience, and that the average consumers do not need those features. That’s fair enough, but from a technical standpoint, what Huawei has accomplished cannot be understated: there are billion dollar corporations (Apple, Samsung, Google, Sony, LG) actively spending millions trying to improve low-light performances in mobile photography, only to lose in convincing fashion to Huawei.

In other shooting conditions, the P30 Pro can also hold its own against anyone, though the results are now up for debate. In general, the P30 Pro still tends to overprocess and overexpose images slightly compared to images captured by the iPhone or Google Pixel, and human skin tone can come off a bit artificial compared to an iPhone’s portraits.

But the P30 Pro can capture impressive bokeh images, thanks to a new TOF (time-of-flight) sensor, which allows the phone to produce real-time depth-of-field effect when shooting stills or videos. Whether it’s a crash cymbal, sleeping cat, fried chicken sandwich or person, the depth-of-field effect is natural with accurate edge detection. 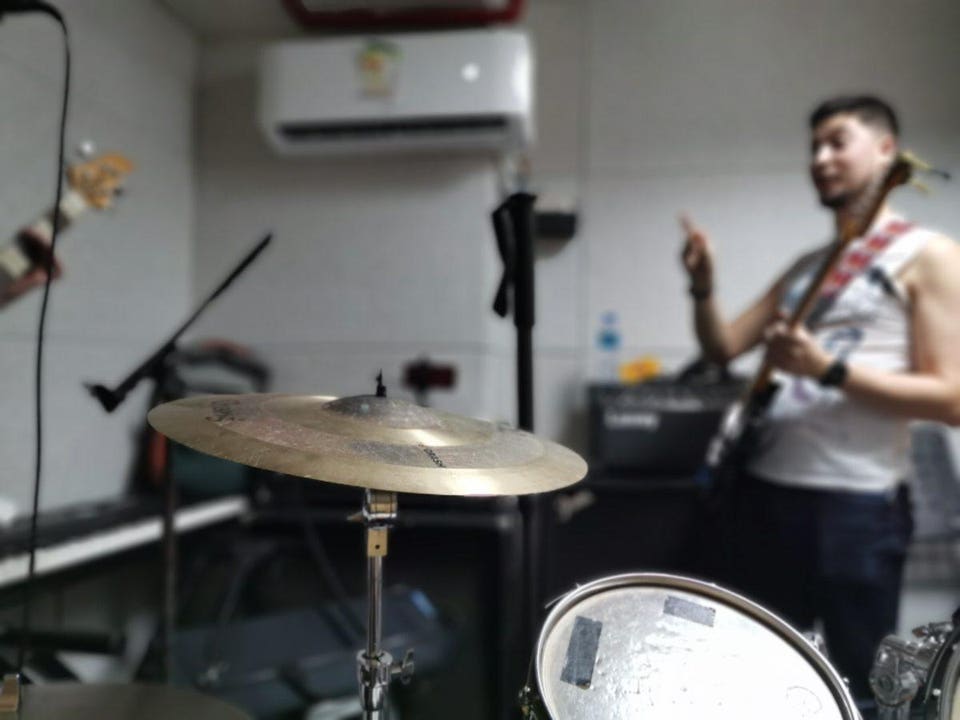 The depth-of-field blur is slightly stronger than I’d like here, but I can tweak this after the fact. 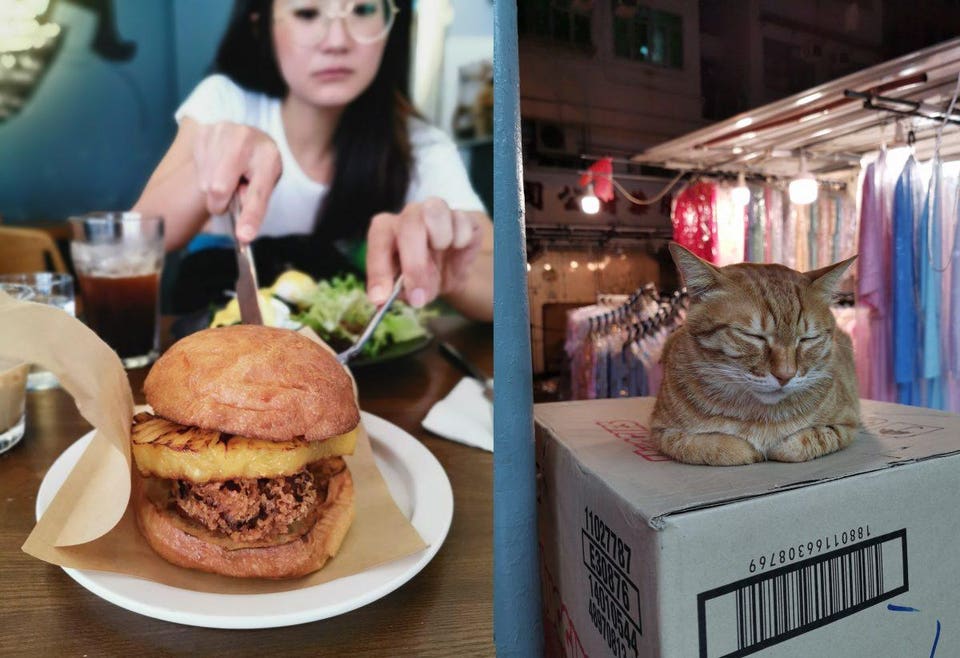 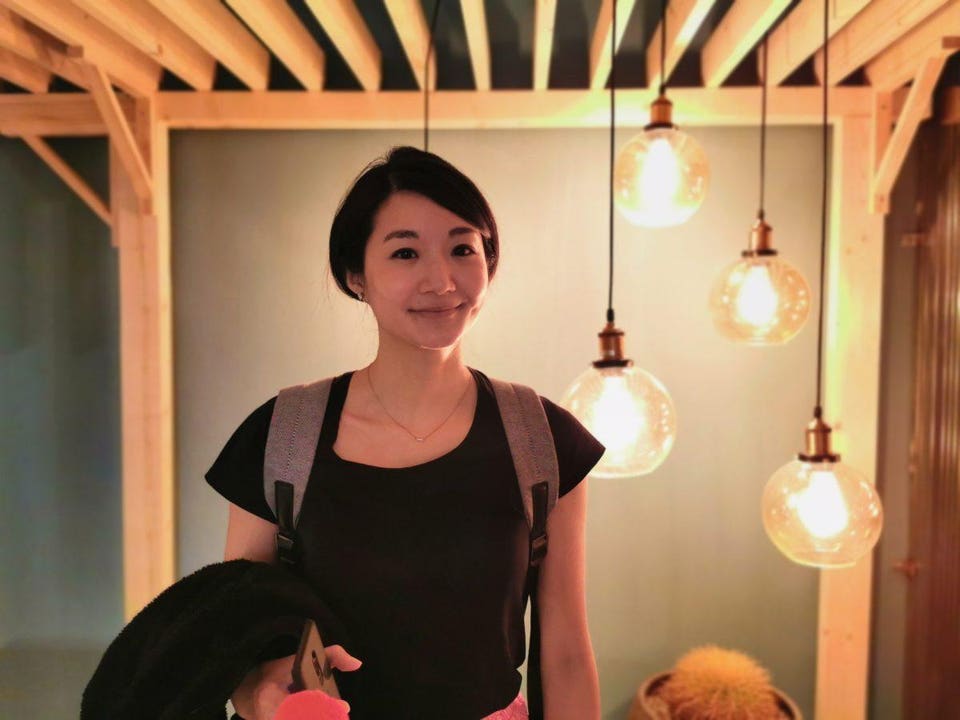 It works well on human subjects, too, of course.

Video recording has previously been a weakness of Huawei phones, and the P30 Pro improves on this end with better stabilization, but the phone still cannot shoot videos at 4K/60fps (all other top phones can do this) and even the improved stabilization still falls short of what the iPhone XS can do. The P30 Pro can capture videos fine; but the iPhone XS and LG G8 are superior at capturing videos.

The P30 Pro runs on the Kirin 980, which is Huawei’s top-of-the-line chipset. It’s a powerful 7nm processor, but it’s about six months old and has been used several other phones, including much cheaper “mid-tier” handsets from Honor. There’s something about this chipset being available on $400 phones that make it feel less premium here. Still, in most usage scenario the Kirin 980 is powerful enough to handle just about anything, though its GPU capabilities are slightly inferior to the Snapdragon 855. This is only noticeable when playing graphically intensive games.

Battery life has always been a strong point of Huawei handsets and nothing has changed here. This is still a phone that will easily last all day and then some. As I’ve written before, Huawei phones can last so long that whenever I switch to another phone, I’m caught off-guard by the faster dwindling battery.

That 6.5-inch OLED display has a resolution of “only” 1080p, so it’s not as pixel-dense as Samsung’s S10 or even the Mate 20 Pro, but I was unable to tell the difference despite putting the two screens side by side. The P30 Pro’s panel is excellent and gets almost just as bright as Samsung’s industry-best screen.

The earpiece has been removed from the top of the display, too, in favor of a vibrating speaker underneath the panel. It sounds great for phone calls, but for reason Huawei wasn’t able to make it pump out louder sound to double as a loud speaker like what LG’s done with the G8. This means the P30 Pro only has a single speaker grille at the bottom of the device, and the audio experience definitely suffers a bit. There’s no headphone jack, either. 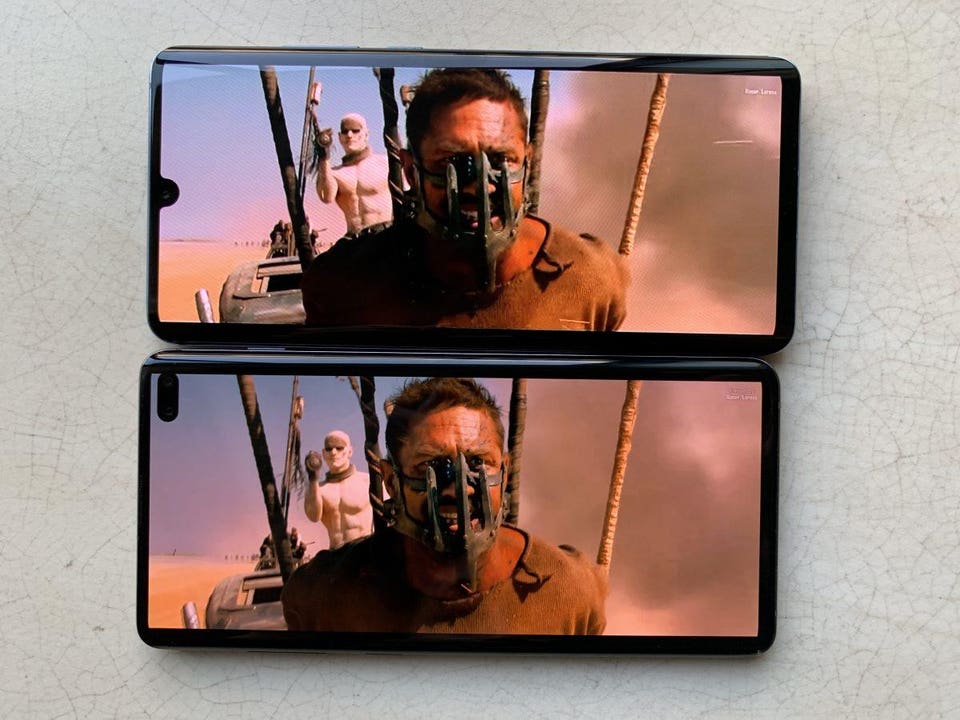 Watching NetFlix or YouTube is more immersive on the S10 or iPhone than P30 Pro.

Software and UI: getting better, but not there yet

The biggest sore point of using Huawei phones for many western reviewers is EMUI, Huawei’s software skin that is heavy handed and looks a bit too much like iOS for most of our liking. Even if we get over the fact that, aesthetically speaking, EMUI is the opposite of what Google has envisioned, there were plenty of bugs or glaring omissions with EMUI in years past that drove reviewers crazy.

For example, when I reviewed my first Huawei phone three years ago, the software routinely killed push notifications due to over-aggressive battery management, and the lockscreen could not display music widgets. Huawei fixed those a year later, but the software still had other issues such as an incompatibility with Nova Launcher and an Always-On Display that didn’t show third party notifications.

I’m happy to report that all of this have been fixed. The Always-On Display isn’t useless now, and Nova Launcher works fine. I’m still not a fan of EMUI’s icon aesthetics or iOS-like system-wide search menu, but Huawei is listening to feedback and making improvements. There’s still some ways to go before I’d call EMUI a good Android skin like what OnePlus or Xiaomi have built, however.

The good news is slapping Nova Launcher over EMUI covers up most of our gripes.

Do you care about seeing in the dark or seeing far?

As I already stated in the opening, it would not be an overstatement to say that, with the P30 Pro, Huawei has developed a breakthrough in mobile photography, anchored mostly by that crazy low-light camera and zoom lens that should go untouched for the rest of this year. And that achievement alone sends the P30 Pro to the top of the pack right now in the smartphone pecking order. 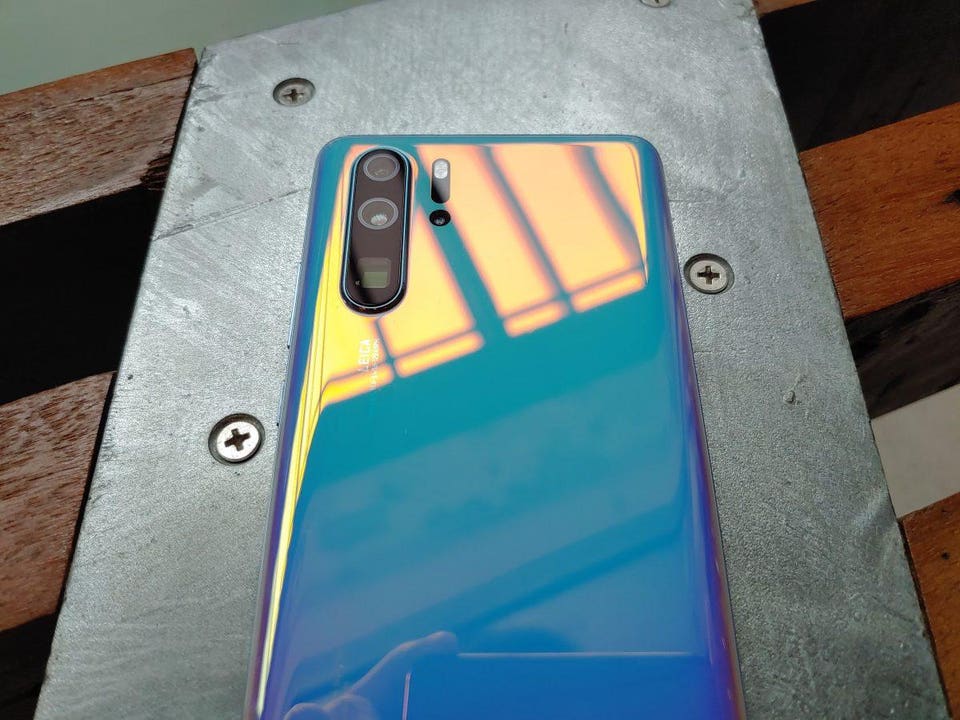 If you really do not see yourself shooting in those conditions much, then the P30 Pro’s edge over the competition shrinks considerably, but then you’re still looking at the best in-class battery life, an almost edge-to-edge vibrant screen, and a versatile camera system with above average wide-angle and bokeh capabilities.

The bottom line is, if all things were considered, the P30 Pro once again offers the most of anyone in the market, and that’s factoring in its $1,100 starting price that’s about on par with Apple’s and Samsung’s price tags. The areas in which it loses to rivals (video capabilities, software aesthetics) are minor or salvageable. But the areas in which the P30 Pro wins, it wins in a landslide.