Tesla (TSLA) shifts into the earnings lane after the closing bell Wednesday with Q1 results that many analysts expect to be as inspiring as a flat tire­—and that’s after a couple weeks of rough riding.

Tesla (TSLA) shifts into the earnings lane after the closing bell Wednesday with Q1 results that many analysts expect to be as inspiring as a flat tire­—and that’s after a couple weeks of rough riding.

Tesla started April with a stock price that had traversed an abnormally rocky road over the 52-week period, hitting highs and lows that jumped as much as $120 in between. On Tuesday, Tesla shares were trading in the $261 range, some 30% below their 52-week high of $376.79 in mid-December (see figure 1 below).

Though analysts expect earnings and revenue to improve in Q1 from a year ago, they also project sharp sequential losses from Q4, in part due to Q1 deliveries and pricing projections both sliding off the road (see more below).

Tesla’s News Cycle Has Been Busy

Why such a price variation? It could be because TSLA’s messages have been mixed this quarter, according to most analysts covering the stock. They point to examples such as Chief Executive Elon Musk saying on a conference call with reporters Feb. 28 that he would close all the electric car company’s dealers as part of a cost-cutting effort and only sell the cars online—a decision that was reversed 11 days later.

Last week, TSLA announced a shakeup of its board—something some analysts thought could be tied to Musk’s tussle with the Securities and Exchange Commission (SEC). The company said that four board members will be stepping down over the next two years as the company shrinks the board.

On Monday, only two days before earnings were scheduled, TSLA held a press conference to announce that the era of self-driving cars is here. The company said it will have autonomous Teslas on the road by the end of the year, with a “robo-taxi” program by next year.

The news split Wall Street between skeptics and supporters on whether TSLA can make good on its ambitious plans. At the news conference, Musk made a sly reference to it: “The only criticism—it’s a fair one—is that I’m not on time. But I get it done.”

Also on Monday, TSLA said it was sending a team to China to investigate a parking garage video that showed a fire apparently erupting under and around a parked Tesla. There’s no indication that the Tesla car was the source of the fire or how it might have started, but the video appeared to catch investor attention. 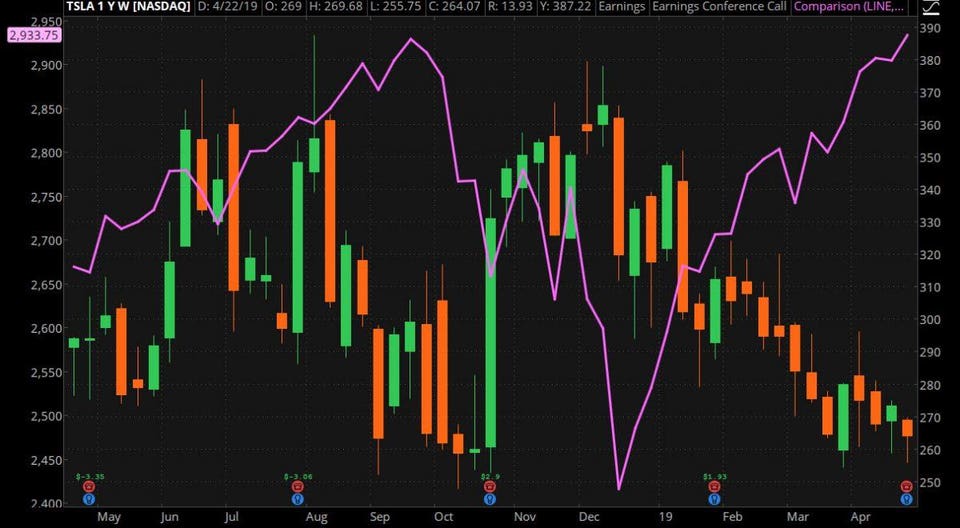 Wall Street is bracing for a loss after two profitable quarters because TSLA shifted gears in February with a vague warning about the quarter. The statement came only a month after telling investors on the Q4 conference call that there would be a Q1 profit, albeit a small one.

On April 3, TSLA said Q1 deliveries across all three models plunged 31% to 63,000 cars from Q4, which, coupled with pricing adjustments, would put a dent in Q1 net income. Shares tumbled 8% on the news.

“Because of the lower-than-expected delivery volumes and several pricing adjustments, we expect Q1 net income to be negatively impacted,” the company said then.

Pricing adjustments were necessary to make the cars more affordable, according to the company. On Jan. 1, prices for the vehicles effectively shot up with the cut in the federal tax credit that buyers of electric cars had received as purchase incentives. The credit is being phased out, starting with the 50% cut Jan. 1 to $3,750, falling to $1,875 after July 1 and ending next Jan. 1.

What investors also might want to watch for is TSLA’s cash on hand. TSLA ended 2018 with $3.7 billion in cash, but had to fork over nearly $1 billion in March to bondholders. TSLA said its cash reserve was “sufficient,” but not all analysts seem convinced. Though the company is widely expected to report a loss, some see the potential for an upside surprise. Stay tuned.

Options traders have priced in approximately a 6.6% stock price move in either direction around the upcoming earnings release, according to the Market Maker Move indicator on the thinkorswim® platform. Implied volatility was at the 53rd percentile as of Wednesday morning.